This stimulating evening event (7 Nov) at the Institute of Mechanical Engineers was both heartening (the UK has achieved really impressive CO2 reduction since 1990) and concerning, I’ll explain why.

The expert panel of speakers outlined some of the challenges the UK faces in deploying the technologies needed to meet the our (legally binding) targets for an 80% reduction in CO2 emissions between 1990 and 2050.  John Loughhead (Chief Scientific Adviser to BEIS) gave an authoritative keynote which showed just how far the UK has come since 1990 and the scale of change needed going forward.  Then Owen Bellamy (Committee on Climate Change), Grant Spence (Mott MacDonald) and Esther Dudek (EA Technology Ltd) respectively, and very ably, described challenges associated with the policy gap between the UKs current trajectory and the 2050 emissions target, the electricity Grid, and the infrastructure needed for large numbers of households to be able to charge electric vehicles (EVs).

What struck me is just how difficult it is to get any sense of how confident we can be of meeting the UK’s 2050 target.  There is much to support the generally optimistic view from the panel – most notably the impressive UK performance to date.  In the period to 2015, CO2 emissions have reduced by 42% while UK GDP has increased by 67% – close to a three-fold reduction in our carbon intensity and a tremendous achievement.  UK Government projections forecast that the UK will continue to be outperform our emissions reduction target through to 2022.  Noting a tendency to overestimate what can be achieved in the short term but to underestimate long term gains, John Loughead argues that there are strong grounds to believe that the momentum already achieved will be built on to find ways to successfully overcome the challenges ahead beyond 2022.

However, there is a counter-argument which is both considerably less appealing, and equally plausible – that much of the progress made to date, impressive as it is, will appear with hindsight to be low hanging fruit when compared to the challenges ahead. 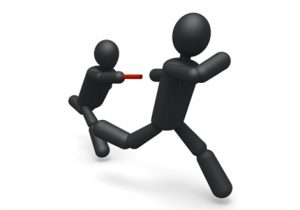 My, rather simplified, take on this compares our 1990-to-2050 transition to a four-leg relay race. In the 1st leg we benefited from the switch away from coal fired power generation & the collateral emission reductions associated with landfill tax.  For the second leg the baton has been passed to rapid uptake of renewables, notably offshore wind, where impressive cost reduction performance provides confidence that large scale deployment will continue.  So there’s a strong case for confidence that we will be ahead at the halfway stage (2020).

The question is, will the runners for the third and fourth legs, be ready and able to deliver the accelerating level of year-on-year improvements needed towards 2050?

Taken together the presentations covered five areas of challenge, all of which need solutions to be deployed at nationally significant scale before 2050.   Whilst these are not the only technologies required, they have capacity to underpin a substantial proportion of the further gains needed, but each has significant challenges to overcome:

I’d agree that the successful cost reductions achieved in offshore wind give grounds for optimism that similar can be achieved in the above areas.  If the challenges were technical alone, I’d readily share the confidence of the panel.  However, even accepting that substantial cost reductions can be achieved through development and scale, these areas will still present major economic challenges.  Not least that, where changes to our existing infrastructure are within design life, extremely large asset write downs will be needed – with associated impacts on pension funds.

It seems to me that, for the 5 challenges above, we are only just off the starting blocks.  If we accept that it takes 20 to 30 years to transition from commercially viable pilots to large scale deployment then high confidence in the eventual commercially viability of all five will be needed between 2020 and 2030.  That confidence will depend on radical changes to the way we all expect to use energy and acceptance of living in an economy where carbon is priced considerably higher than it is at present.

However the pathway to society accepting these costs is not at all clear.  The EU ETS carbon price has been languishing below €8/tonne since 2010 – arguably an order of magnitude lower than will be needed for the large-scale deployment of some of the technologies.  With Eastern Europe still committed to coal, the prospects for substantial change in the near term look slim.

The prize is substantial, not just in terms of UK emissions, but with opportunity for UK industry, financial and education sectors to be at the forefront of a global transition.  However the window of opportunity to ensure the the second half of the race is as successful as the first is slim. Given present levels of public engagement in energy and carbon issues, there is therefore a need, over the next 5 years, for significant will and leadership from our somewhat distracted politicians.  Something it is difficult to be optimistic about.

So, to return to the relay analogy:  at a technical level, I can see that we should be able identify who our third and fourth runners will be, and prepare them for the race – but, with an absence of political leadership, there seems to be a real risk that the track they will need to run on is steeply uphill.